Socialist Appeal - the Marxist voice of Labour and youth.
The Deepwater Horizon oil spill in the Gulf of Mexico highlights the real state of US capitalism today. While making a lot of noise, Obama is not prepared to take on the oil companies in any serious meaningful way. What he is doing is passing the buck to the US working class.

The Deepwater Horizon oil spill in the Gulf of Mexico highlights the real state of US capitalism today. While making a lot of noise, Obama is not prepared to take on the oil companies in any serious meaningful way. What he is doing is passing the buck to the US working class. 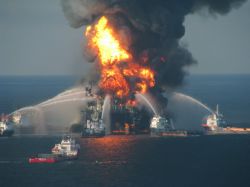 Deepwater Horizon on fire. Photo by US Coast Guard.On April 20th of this year, the Deepwater Horizon Oil platform exploded and sank into the Gulf of Mexico, unleashing a torrential leak of raw petroleum and killing 11 platform workers. For weeks on end, millions of gallons of oil hemorrhaged into the Gulf from the shattered wellhead, poisoning that body of water and every form of marine life therein for the foreseeable future. On top of that, tens of thousands of gallons of Corexit oil dispersant, which oyster fishermen claim is as much as four times as toxic as the oil, have been dumped in the Gulf. The Gulf’s fisheries and other forms of marine industry - a way of life for generations - will know incalculable economic impact for decades to come.

The contracted manager of the rig, British Petroleum, as well as the owner of the platform TransOcean (which collected $270 million in insurance from the disaster), and sub-contractor Halliburton International, have in the interim attempted a number of strategies in order to counter this devastating oil spill. Among the means implemented were the use of several undersea caps, the blasting of tons of refuse into the breach, and filling the leaking well with mud. None of these efforts met with success, in part due to the fact that they were completely unprepared for such a disaster, having cut as many corners as possible in their drive to maximize profits.

It was in the first week of June, when BP was apparently seriously considering the use of a small undersea nuclear device to staunch the flow of oil, that the company found some success with an effort called a “lower marine riser package,” which placed a containment cap on a freshly cut section of the gushing pipe. This has allowed them to siphon some of the spilling oil up to the surface, making possible the capture of as much as 90 per cent of the oil that is leaking. All in all, this is a positive development, given that the leakage had reached the loss of 500,000 gallons of oil a day by even very conservative estimates.

However, in the days since the capping, some caveats have been made by the oil company. It is conceded that the current cap, like earlier ones, could also become encrusted with ice crystals and prevent siphoning of the leak before relief wells can be successfully drilled. The hurricane season, according to many specialists, could also severely disrupt efforts to collect the oil and prevent it from washing ashore. 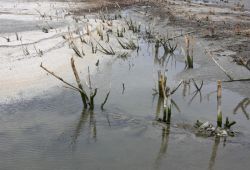 Photo by New Orleans Lady.Still, it must be said there still seems to be very little recognition of the scope of this disaster. Despite the partial “fix” of the leak, huge plumes of oil continue to travel beneath the surface waters of the Gulf of Mexico, wreaking unbelievable destruction upon that continental shelf and its ecosystem. The Mississippi River Delta in Louisiana and all of its attendant natural and human created values will suffer hundreds of billions of dollars in damage, and oil is now beginning to show up on the shorelines of Mississippi, Alabama and Florida. It is widely acknowledged that the assets of BP will not be enough to cover the damage they have caused, all while they contemplate handing out billions in “earnings” to their investors.

As is the custom of global capital of late, the state has stepped in to “assist” BP. This means, in effect, that the working class taxpayer in the United States will shoulder the burden. Already, millions have been spent by the government on efforts to clean up or prevent the spread of oil, not to mention the time and money of thousands of volunteers. It is true that the Obama Administration has compelled BP to set aside an independently administered escrow account of $20 billion in order to pay compensation to fishermen, seafood processors and tourist industries derailed by the ongoing effects of the spill. But this is once again a case of Obama giving the appearance of doing something, while in reality, nothing of substance has changed. BP was going to have to pay out billions in claims anyway. Given that the actual known and anticipated cost of the spill is believed to be in the trillions, we can well expect that untold millions more in our tax dollars will be paid out to cover BP’s rear, at the expense of the working class and what little public infrastructure, health care, education and social services we still have in this country.

It is naïve to expect anything else. After all, as Alaskan Congressman Don Young, himself a beneficiary of oil company largesse during his long tenure as that state’s lone congressperson, said a few weeks ago, “When there’s a plane crash, we don’t stop flying.” All of capital’s ideologues, from the open reactionaries of the Republicans, to the so-called “progressive” Democrats, find humanity and the planet expendable in the pursuit of profit. 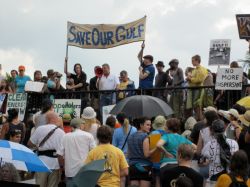 Protest in New Orleans against the oil spill. Photo by Infrogmation.These kinds of disasters need not happen, certainly not on this scale. And it is not just British Petroleum, TransOcean and Halliburton. All the mega corporations on the planet make their obscene profits off the labor and suffering of others, with complete disregard for the effects on the workers, environment, and future generations. As with the banking sector, they play games with the lives of millions, hysterically reject any kind of government intervention when the profits are rolling in, but are quick to pass the bill for the cleanup and the far-reaching consequences of these avoidable tragedies to the public when things go wrong. We have a straightforward proposal: if they want public money, we want public control. It’s that simple.

This is yet another example of why the working class majority of society needs to take political and economic control into its own hands. This is why we are for the nationalization of the big oil corporations and related industries under democratic public control. The assets of these companies should be seized and used to clean up the mess, launch a massive plan to create millions of jobs and build up public transportation, and retrain oil and coal workers as we transition to renewable energy. Of course, the two parties of Big Business are not about to do any of this. Only a government that represents the interests of the working class majority could even pose the need for such measures openly. 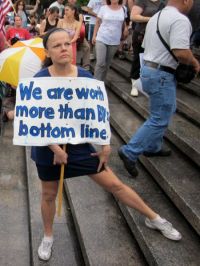 Protest in New Orleans against the oil spill. Photo by Infrogmation.The future is with the independent political mobilization of the working class, rooted in a revolutionary democratic and Marxist method, or there is no future worth speaking of. As a first step in this direction, we believe we need a new political party, one that represents the working class majority of this country: a mass party of labor based on the unions. Imagine if independent Labor candidates were to run in the midterm elections on a program of nationalizing the big oil companies. Unfortunately, the labor leaders are supporting the Democrats who are bailing BP out. We can and must change this approach in our unions.

Ultimately, only the socialist transformation of society can ensure that we have truly democratic control over production, distribution and exchange, in harmony with the environment. Those readers who are in agreement with this perspective should join our effort to build such a movement as members of the Workers International League.