Monday 2nd June saw the founding meeting of the ‘Solidarity with the Antifascist Resistance in Ukraine’ campaign, which was hosted by the Marxist Student Federation in SOAS, London. Over 150 people attended the meeting to discuss the need for a campaign in support of the antifascist resistance in Ukraine to provide a counterweight to the lies and distortions of the Western media.

Monday 2nd June saw the founding meeting of the ‘Solidarity with the Antifascist Resistance in Ukraine’ campaign, which was hosted by the Marxist Student Federation in SOAS, London.

Over 150 people attended the meeting to hear Richard Brenner (Solidarity with the Antifascist Resistance in Ukraine), Lindsey German (Counterfire), Boris Kagarlitsky (Institute for globalization studies and social movements), Andrew Murray (Communist Party of Britain), Alan Woods (International Marxist Tendency) and Sergei Kirichuk (Borotba) discuss the threat of fascism in Ukraine, the role of imperialism in the current situation and the need for a campaign in support of the antifascist resistance in Ukraine to provide a counterweight to the lies and distortions of the Western media.

[Click here to view the videos and listen to the audio files of the opening talks.]

Richard Brenner opened the meeting, saying the reality is that the Ukrainian regime is at war with its own people and pointed to the recent series of assaults by the army and so-called ‘National Guard’ (recruited mainly from fascist gangs) on towns in Luhansk and Donetsk as part of the ‘Anti-Terrorist Operation’ being carried out by the regime. He also discussed the amount of power and influence wielded by fascism and the far-right in Ukraine (particularly in the West), explaining that despite far-right parties only obtaining 2% of the vote in the recent presidential election, there are a total of 7 far-right ministers still in the government (5 from the far-right Svoboda party and 2 linked to the openly fascist UNA-UNSO).

Lindsey German highlighted the hypocritical bias of the Western media, which consistently refers to the protestors in the East as “pro-Russian” rather than simply “anti-government”. She also raised the expansion of NATO to almost all of Eastern Europe over the last period and explained that the planned NATO manoeuvres in Ukraine represent not only a threat to Ukraine but to the rest of Europe as well, emphasising the need to mobilise for the coming NATO summit in Newport (South Wales) this September.

Boris Kagarlitsky (who spoke to the meeting via Skype) raised the point that this was not simply a cultural conflict between the Russian and Ukrainian language (although cultural factors are present) but rather a much deeper economic and social one. He explained that 60-80% of Ukrainian GDP is produced in East Ukraine and that much of this wealth has been redistributed to the oligarchs rather than to poor Western Ukrainians, fuelling resentment. Boris also made the point that the Ukrainian government needs far-right and fascist groups such as Right Sector in order to force through its drastic austerity policy.

Andrew Murray explained that “fascism is as fascism does” and that the recent attacks by fascist thugs, such as the brutal murder of protesters in Odessa, show that we are talking about real fascism, not just the equivalent of UKIP in Britain. He also warned against prettifying the intervention of the EU as if “over there” it is a good thing whilst “over here” it is not. He also stressed that the Left should be united and put pressure on the British government to cease its support of fascism in Ukraine. 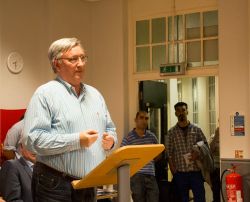 Alan Woods of the International Marxist TendencyAlan Woods agreed that the best way to assist the Ukrainian resistance is “to conduct an implacable struggle against our own reactionary government in Britain”, but added that this must be part of an international movement against the risk of reaction in Ukraine and in solidarity with its working people. He stressed that there was not an atom of progressive content in the collapse of the Soviet Union, which he explained was at the root of the current situation of war, chaos and oligarchic plunder. 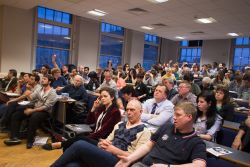 He also pointed out that the resistance in the East is fundamentally a movement based on the industrial working class and that the current attacks by the Ukrainian and state-sponsored fascist gangs were nothing other than a “White Terror”.  He described the Kiev authorities as “a government trying to ‘convince’ its own people with the ‘democratic friendly argument’ of bombs, machine guns, murders and white terror”.  “It is an elementary duty of the labour movement every where to stand in defence of workers who are fighting to defend their interests, living standards, jobs and democratic rights against repression”.

Alan Woods said that it was to confuse the issue to present it as one of Russian speakers against Ukrainian speakers. He said that there were always fraternal bonds between workers of different countries and particularly Ukrainians and Russians. “Proof of this is that on three occasions the reactionary government in Kiev sent the army against the people in the East and failed. Why? Because in each occasion Ukrainian soldiers mutinied and said they did not want to have anything to do with it”. This was also the reason why the Kiev government (supported by US imperialism “the most reactionary force on the planet”) is now created the National Guard, composed of fascist elements to crush the movement in the East.

Alan finished by saying “is it not time that the Left stopped this abject retreat before the capitalist market economy and started a counter-offensive, based on the ideas of genuine proletarian internationalism, revolutionary Marxism, which is the only way forward.” “The struggle against fascism is sterile unless it is linked to the struggle against oligarchy, capitalism, landlords and imperialism worldwide” he added.

Sergei Kirichuk (who also spoke via Skype) explained that the EU-Ukraine free-trade agreement is not genuine ‘free-trade’ but rather the robbing of Ukraine by imperialism, using as an example the recent appointment of Hunter Biden (son of Joe Biden) to the board of Ukraine’s largest private gas producer. Sergei also pointed out that the state budget of Ukraine was now empty and that in return for a bailout the IMF is demanding austerity and order. 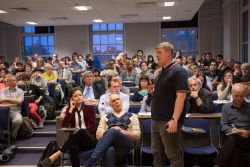 Representative of the RMT Paddington N1 branchA representative of the RMT Paddington n1 branch also addressed the meeting, giving solidarity and promising to move an emergency motion to get the union to affiliate nationally to the campaign; an announcement that was greeted with loud applause from the floor. He stressed the need for the campaign to be based broad based and rooted in the labour movement.

Other contributions from the floor pointed out the lack of self-determination for the Ukraine if its government is nothing more than a puppet of the IMF and raised the inability of Rinat Akhmetov, one of East Ukraine’s most powerful oligarchs, to get more than 300 of his almost 300,000 employees to come out on a counter-demonstration against the Donetsk Republic.

The meeting was not without controversy as a couple of supporters of the Ukrainian government intervened from the floor, one of them going as far as to say that the aerial bombing of the Luhansk local administrative building (on the same date as the meeting was taking place) had been carried out by the rebels themselves!

At the end of the meeting there was an overwhelmingly vote in favour of launching the campaign, the main aims of which are published below: