Mass demonstrations were seen in cities across the country over the weekend, as thousands took to the streets to condemn the crimes of Israeli imperialism, and to show support for the Palestinian liberation struggle. Intifada until victory!

Mass demonstrations were seen in cities across the country over the weekend, as workers and youth took to the streets to condemn the crimes of Israeli imperialism, and to show support for the Palestinian liberation struggle. Intifada until victory!

Following on from recent mass protests over violence against women and the right to protest, further huge demonstrations broke out up-and-down the country last weekend – this time to call for an end to the Israeli bombing and occupation of Gaza.

These latest protests are part of an international movement, with similar Palestine solidarity demonstrations seen in countries across the world.

This global movement has been sparked by the barbaric events in the Middle East, where the Netanyahu government has provoked a conflict in order to distract from its own political crises back home.

As air strikes rain down on Gaza, Netanyahu is whipping up far-right Zionist pogroms against Palestinian neighbourhoods inside Israel itself. Meanwhile, the Western imperialist powers and global capitalist media stand on the sidelines, hypocritically calling for an ‘end to violence on both sides’.

But a new generation of Palestinian youth is mobilising and fighting back against this oppression. And their struggle is increasingly finding an echo internationally, as workers and youth everywhere come out onto the streets to protest against repression and injustice – at home and abroad.

The conclusion is rapidly – and correctly – being drawn: there can be no real peace under capitalism. Only revolutionary struggle can end the Israeli apartheid and liberate the Palestinian people.

Last Saturday in London, 150,000 people marched to the Israeli embassy in Kensington, in solidarity with the Palestinan people. This was the largest protest Britain has seen in years, and certainly the largest protest for Palestine since the 2014 war on Gaza.

Tens of thousands of protesters gathered at Speakers’ Corner in London’s Hyde Park. Placards were held high, with slogans such as: ‘End Israeli Aparthaid’; ‘Stop Arming Israel’; and ‘Fight like Columbia, Resist like Palestine’.

The main political demands of the protest were to stop the bombing of Gaza; save Sheikh Jarrah, an area where Palestinans are being evicted to make way for Jewish settlers; and end the terror and dispossession inflicted on the Palestinan people everyday.

The protest coincided with the 73rd anniversary of Nakba day, marking the beginning of the Palestinan exodus, when hundreds of thousands were forcibly evicted and dispossessed from their homelands. 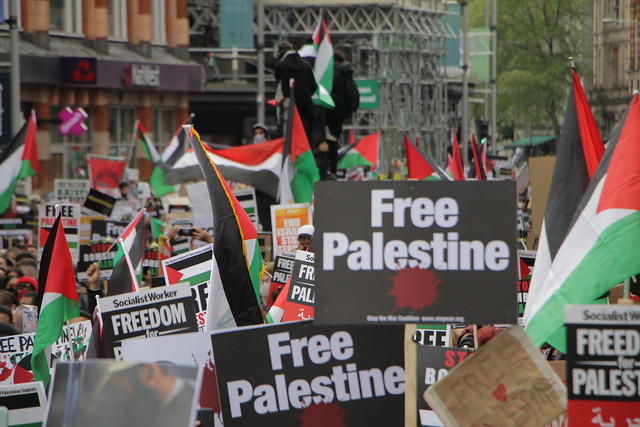 Despite Labour leader Keir Starmer's silence on this question, many Labour Party and trade union groups were in attendance, with banners from Hackney CLP, Camden Momentum, and Tower Hamlets Unison all clearly visible amongst the massive crowd.

Starmer was also called out when Jeremy Corbyn was introduced on stage as the “real leader of the opposition”. This provoked chants of “oh Jeremy Corbyn” to ring out. Notably, a number of other left-wing Labour MPs spoke from the platform, including Diane Abbott, Zarah Sultana, Apsana Begum, and Bell Ribeiro-Addy.

A lively bloc of Socialist Appeal activists also joined the protest. Comrades enthusiastically raised slogans that were picked up by others on the demonstration, including: “Intifada until victory, revolution until victory”; “the UK is not innocent”; and “One solution, revolution”.

Alexei Sayle made my day. pic.twitter.com/GdB4B4nyJX

On Sunday, the Glasgow Marxists joined the nearly 10,000-strong march through the city’s streets in solidarity with Palestine.

Families and groups of young people filled George Square, with loud chants in support of Palestinian liberation. The demonstration then marched through the city centre, all the way to the BBC Pacific Quay studios.

News of the protest had largely been spread through social media and word-of-mouth, reaching Glasgow’s Muslim communities, who turned out in strong numbers.

Numbers were no doubt boosted by the previous week’s events, when these communities were besieged by the UK Home Office, with their attempted – but overturned – immigration raid at Kenmure Street.

The anger and feeling of strength brought about by this successful struggle was carried through to Sunday’s mass demonstration.

As the unexpectedly hot sun beat down on the marchers, there were spontaneous chants of ‘free Palestine!’ and ‘occupation no more!’ – some started by children no older than 12.

Drivers honked their horns and revved their engines in a show of support, while people applauded and flew Palestine flags from their balconies by the Clyde. Hospitality workers emerged from restaurants and cafés to clap for the passing march.

The Scottish people stand with Gaza.

A sea of protesters hit the streets of Glasgow today to show their support for Palestine. pic.twitter.com/KPNBZ7UHCi

Our route led us to the BBC studios, to draw attention to the atrocious bias in the mainstream media’s reporting of Israel’s attacks on Palestine.

Every day, as Gazans are butchered in their dozens, the capitalist press only seems interested in reporting on the actions of Hamas. While Netanyahu openly announces his intention to bomb or starve Gaza out of existence, the media touts so-called ‘world leaders’ as they reaffirm Israel’s ‘right to defend itself’!

Even when the Israeli army directly attacks the international press, levelling the offices of Al Jazeera, the Associated Press, and others, the BBC publishes the official justification that there were “Hamas military assets” involved.

People have had enough of the lies. The truth is coming out. And when it does, millions around the world join protests like this.

The crimes of Israel’s apartheid and occupation of Palestine are notorious. And the world working class stands in solidarity with the Palestinian struggle for liberation.

No trust in an imperialist ‘Peace’! Intifada until victory!

There was enormous amounts of enthusiasm at Oxford’s March for Palestine on Sunday, with groups of people gathering at the meeting point over an hour before the 2pm start time. Estimates for the total turnout range from several hundred to over two thousand.

The march blocked much of the traffic on some of Oxford’s main roads for almost two hours, before arriving at Bonn Square in the city centre for speeches.

There was a much broader range of people present at this protest than at many other demonstrations in Oxford. Entire families turned out, alongside unions, the Labour Party, and Black Lives Matter.

During the march, the chants – with calls to free Palestine – were often led by children.

Many of the signs held and speeches given also emphasised the importance of international solidarity – linking the experiences of Palestine to Kashmir and West Papua.

Jeremy Corbyn also spoke on the platform. He discussed what could be done by people in Britain to show solidarity, highlighting the need to relentlessly oppose the UK government’s selling of arms to Israel.

There was a clear sense of outrage and anguish amongst the crowd towards the suffering taking place in Gaza – along with a determination that something must urgently be done.

This ‘something’ cannot be a reliance on the British ruling class or any imperialist ‘peace’ plans. What is needed is continued international mobilisation of workers and youth against the bombing in Gaza, as part of the wider struggle against the capitalist system worldwide.

On Saturday in Edinburgh, John Maclean Society marched in solidarity with Palestinians against the brutal Israeli oppression across all occupied territories and the inhumane war on Gaza.

The protest started in Regent Road Park. Addressing a crowd of at least 2,000 people, Palestinian speakers relayed their own experiences. And local organisations also spoke of actions that could be taken to help end this occupation, including demanding that the UK government stop selling arms to Israel.

The crowd marched to the US Consulate in Edinburgh, chanting for a free Palestine, and denouncing global imperialism and the US support of the Israeli war machine.

The crowd also sent a strong message to the Scottish government about their own complicity, spontaneously marching across Princess Street to the official residence of First Minister Nicola Sturgeon. This effectively shut down the street and inspired many to join on the way.

The demonstration fell on the 73rd anniversary of Nakba, meaning ‘the catastrophe’. This is when hundreds of thousands of Palestinians were massacred or were forced to flee their homes, at the time that the state of Israel was established.

In reality, the Nakba is ongoing. The Zionist occupation still represses Palestinians to this day, restricting their movements and controlling their resources.

Israeli imperialism continues its attempts to ethnically cleanse occupied cities – as we’ve seen in Sheikh Jarrah in recent weeks. And it continues its siege on Gaza, preventing access to basic necessities, and mercilessly bombarding the strip and its population whenever it sees fit.

Recently, a mass uprising was seen across all of occupied Palestine, including inside Israel. As in Edinburgh, people have come out in their thousands all over the world, in support and solidarity.

These mass movements are the way forward. No solution will ever be granted by imperialist ‘peace’ plans. We must have no trust or illusions in imperialism and its organisations, such as the UN.

For international mobilisation and working-class unity! For the overthrow of capitalism – at home and abroad!

Some 1,500 people attended the Newcastle4Palestine demo on Saturday.

This demo was noticeably different in composition to your ‘average’ demo in Newcastle. The big majority of those present were from the Muslim communities in the city, with whole families attending. And there was a high proportion of young people present.

This reflects the depth of feeling at the events in Gaza.

Socialist Appeal supporters from Newcastle and surrounding areas participated, receiving a great response to our paper and revolutionary slogans.