One of the great classics of Marxism is the book by Frederick Engels entitled ‘The Origins of the Family, Private Property and the State’. Engels applies the method of historical materialism to this earliest period of pre-history to uncover the past. As a contribution to International Women’s Day, we are republishing in two parts an article by Mary Hansen and Rob Sewell which examines this question.


One of the great classics of Marxism is the book by Frederick Engels entitled ‘The Origins of the Family, Private Property and the State’. Engels applies the method of historical materialism to this earliest period of pre-history to uncover the past. As a contribution to International Women’s Day, we are republishing in two parts an article by Mary Hansen and Rob Sewell which examines this question.

18th century artist's impression of Kalina hunter gatherersNot until the scientific discoveries of the American anthropologist Lewis H. Morgan in the 19th century was the family recognised, not as an eternal institution, but as an historical entity. Up until then, the view of the family was dominated by the outlook of the Five Books of Moses.

The research of Morgan was revolutionary in the field of anthropology and the development of an historical approach to the evolution of the state, family and private property. Such were the implications of Morgan's ideas, that they were eagerly taken up by Marx and Engels as confirmation of their own views on history. “Morgan rediscovered in America,” states Engels, “in his own way, the materialist conception of history that had been discovered by Marx forty years ago...”

According to the materialist conception of history, the key factor in history, in the last analysis, is the production and reproduction of life. Before men and women can do anything they first have to produce the means of life. This means first and foremost the production of the means of subsistence. The society under which men and women live is determined by the stage of production which in turn is reflected in social relations. However, the more primitive the productive basis, as under 'primitive communism', the greater preponderance does the social order appear to be dominated by sexual relations. In reality, the whole basis of society is underpinned by how things are produced.

Since the discoveries of Morgan in particular, which delved into the vast stretch of human history from our earliest origins to the threshold of civilisation, and the publication of Engels' Origins of the Family, there has been an enormous development in related sciences, anthropology, zoology and palaeontology.

Although this has brought many new insights into our pre-history, it has also been accompanied by various interpretations which have been steeped in the prejudices of modern class society. Some observers, like zoologist Desmond Morris, falsely characterise early human development by mindless violence, aggression, brutality and hierarchical domination - reflecting the weaknesses of human nature. These writers see no qualitative difference between man and ape, despite the evolution of human consciousness over the last million years.

Deliberate efforts were made to undermine Engels' writings by discrediting Morgan's research upon which the former analysis was based. According to the newly revised Open University book entitled Understanding the Family (1995), “Engels' work is now generally viewed as pioneering - in that it raised the issue of the nuclear family as a vehicle by which men control women's sexuality - but is also seriously flawed.” (Page 24). On the contrary, the thrust of Engels argument was not about “men's control of women”, but in understanding the family, the state and private property, as historical stages in human development.

“Though he made a number of specific ethnographic errors, I think his main ideas are correct and remain the best way of explaining data gathered since he wrote - mainly ethnographic and historical data which show that women's social position has not always been, everywhere or in most respects subordinate to man.” (Towards Anthropology of Women, p211)

Engels acknowledged in his 1891 preface to Origins of the Family, that as the result of new evidence “some of Morgan's hypotheses pertaining to particular points have been shaken, or even become untenable.” 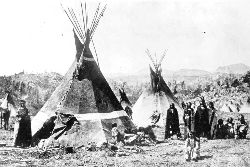 Shoshoni tipis in the 19th centuryDespite its limitations, Morgan's work attempted to shed light in evolutionary terms on the earliest period of human development. In a materialist fashion he divided up history into three phases: savagery, barbarism and civilisation, dealing primarily with the two earlier phases. Each stage was characterised by a certain type of economic activity. Savagery, which constituted 99% of human existence, was based upon food gathering, scavenging and hunting.

Barbarism was based on agriculture and the rearing of cattle. Civilisation, based upon private property, introduced commodity production. The long period of savagery and barbarism constituted the period of 'primitive communism', which was based on co-operation and common ownership of the primitive means of production.

Human existence in its earliest phase was composed of bands of hunters and gatherers, unaffected by classes, the state, family, private property, the market or any attributes of class society. These bands or groups became organised through blood relationships in 'gentes' or 'clans' (which are called 'lineages' by modem anthropologists). According to Engels, in this 'primitive communist' society “everything runs smoothly without soldiers, gendarmes or police; without nobles, kings, governors, prefects or judges; without prisons; without trials.”

“All quarrels and disputes are settled by the whole body of those concerned - the gens or the tribe or individual gentes among themselves... There can be no poor and needy - communistic households and the gens know their obligations towards the aged, the sick and those disabled in war. All are free and equal - including the women.” (Page 159)

As a means of survival, social co-operation must have determined the character of early human society, which is directly linked to the production of tools and co-operation in hunter-gather activities. They had a nomadic form of life based upon the common appropriation of the products of their labour. This inherent equality of primitive society is confirmed by the evidence of surviving hunter-gather societies, such as the !Kung San of the Kalahari and others (the ! denotes a click sound). The key note of the !Kung, in complete contrast to class society, is their egalitarianism, modesty and co-operation.

R. B. Lee in his book, ‘The !Kung San,’ describes the attitude of a successful hunter:

“Say that a man has been hunting. He must not come home and announce like a braggart, 'I have killed a big one in the bush!' He must first sit down in silence until I or someone else comes up to his fire and asks, 'What did you see today?' He replies quietly, 'Ah, I'm no good for hunting. I saw nothing at all - maybe just a tiny one.' Then I smile to myself because I now know he has killed something big.” (page 244)

As with the overwhelming majority of hunter-gather groups there is a sexual division of labour between men and women, where men generally undertake hunting and women gather roots and plants. This is nothing to do with a division based upon prestige or superiority, but due to the women's role in child bearing and the need to protect the fertility of the group. : “The burden of carrying infants on food-gathering expeditions is great”, writes Richard Leakey and Roger Lewin.

“!Kung women walk more than 1500 miles a year with a suckling infant on their backs), but they are clearly equal to the task. But, although collecting plant foods is not without hazards from potential predators, the dangers of hunting are greater.

“The loss of the child to the hungry jaws of a carnivorous cat would be a serious blow to a woman's reproductive career. To put the child at risk would therefore not be biologically sensible, either for the woman or her mate... for these and other reasons, women only rarely hunt.”

Engels underlines the equality amongst men and women in these early societies. Based on Morgan’s research, he stresses the importance of the gens or lineages, which was theoretically based on 'blood', in determining social relations. For instance, in matrilineal societies where descent is reckoned through the female line, a person's most important ties are with their mother and their mother's brother; in a similar fashion, the man's main responsibility is towards his sister's children.

Again in matriarchal societies, a man enters a household run by his wife, her mother and sisters. Each household represents a different lineage or gens with its definite obligations and responsibilities. Morgan outlines the first stage of family as the ‘consanguine’ family where all descendants of a pair are all mutual husbands and wives.

This apparently gave way to the ‘punaluan’ family, where parents and children were excluded from sexual relations. This was characterised as group marriage and gave way to the pairing family.

However, this view has been challenged as recent evidence of hunter--gather societies have not been so rigid with flexibility between the lineage or clan. Engels nevertheless sees this development as the earliest form of social organisation. Sexual relations (“primitive promiscuity”) would have meant that offspring could only identify their mother.

Only later, with the further development of society, did it give way to patrilineality or decent through the male line, especially with the emergence of private property.

“Among pure cultivators, owing to the role of the women's contributions to the collective economy, kinship is naturally reckoned in the female line, and the system of mother right' prevails. With stock-breeding, on the contrary, economic and social influence passes to the male and kinship is patrilinear.” (What Happened in History, p 73).

[To be continued... Engels’ great work can be ordered at www.wellredbooks.net]