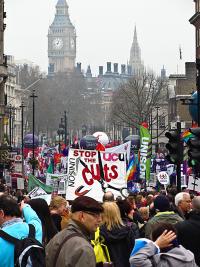 March 26 in London. Photo: Garry KnightVince Cable, the Business Secretary very quickly announced that the government will not change its economic strategy as a result of a demonstration. His words are those of the ruling class that is determined to push through the biggest cuts in living standards since the 1920s. This arises not from the wickedness of the Coalition, but from the crisis of British capitalism which as a result of the deep slump and banking bail-out has seen government borrowing rocket such that Britain now has a higher budget deficit than sickly Portugal.

However, the real test will be the implementation of this draconian programme. There is already widespread opposition to the Coalition throughout the country. In a recent ITV/ComRes poll two-thirds thought that the Coalition was out of touch with the plight of ordinary working families. Electoral support for the government has slumped, with the Lib-Dems coming out very badly. 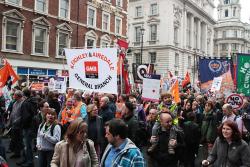 GMB union. Photo: MattieTKPeople are seeing through the government rhetoric even before the impact of the cuts has been felt. Once the axe really falls, we will see a sharp increase in trade union militancy. Remember it was last December’s increase in tuition fees that led to the most serious unrest in London for decades. It is a small taste of what is to come.

The TUC leaders called the March 26th demonstration six months ago, probably hoping that by now things would have calmed down. On the contrary, six months of Tory/Liberal policies have revealed to the mass of working people what is really facing them. And although Vince Cable says the government will not change course, Saturday’s demonstration will have had one very important effect: it has shown to ordinary working people that the conditions to step up the fight-back exist. No trade union leader can now get away with the idea that there aren’t’ the conditions for militant struggle. 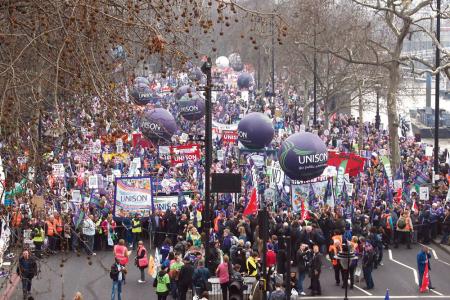 Many workers and rank and file trade unionists will be asking themselves “What now? What is the next step?” After this enormous show of strength, the next step can only be in the direction of more widespread strike action, eventually leading to a general strike. The ruling class is well aware of this and is warning the government not to be overconfident. “The most sustained squeeze on living standards since the 1920s is about to hit the UK,” explains the Financial Times. “There is no telling how the general public will react, or indeed what will be the impact on the Coalition’s cohesion. Mr Osborne would be wise not to count his chickens just yet.” (FT, 27/3/11) 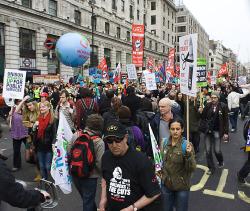 The Greek government’s austerity measures have provoked massive strikes and riots. In Ireland, the slump and the subsequent militant reaction of the workers has resulted in the worst ever election defeat for Fianna Fail. However, the new government is committed virtually to the same austerity, meaning that its honeymoon period will very soon be over.

Similar events are being prepared in Britain. The Financial Times, adds, “It is rash to assume that the British character contains something so uniquely stoical that it will take the pain and advance with a stiff upper lip to the glorious uplands of social peace, and a budget close to balance, by the next election in 2015.”

They know that the TUC demonstration indicates that we are returning to a similar situation to that of the class battles of the 1970s, which brought down the Heath government in 1974. It is entirely possible that this Coalition government could meet a similar fate. 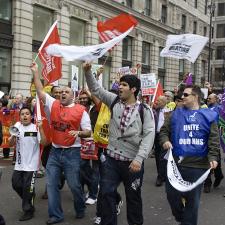 Members of UNITE the unionHowever, in this period of storm and stress, the “alternative” policies being offered by the TUC and the trade union leaders are far from adequate. They imagine that the problems of British capitalism are temporary and that the budget deficit can be eradicated within the confines of the system by changes to taxation levels and other such measures. But the crisis is far deeper than they like to admit.

The Labour Party was originally set up by the trade unions to fight for the workers and a new socialist society. While it still commands support from millions of workers, its leaders have abandoned socialism and accepted capitalism. They seek, however, a sweeter, kinder, friendlier capitalism; in other words capitalism with a “human face”, i.e. a capitalism that does not exist. 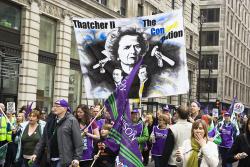 Unison members making link between Thatcher and governmentCapitalism today is crisis-ridden and senile. All the old contradictions, delayed for so long during the boom years, are returning with a vengeance. The capitalist system can no longer afford the reforms of the past. Therefore to ask capitalism for more reforms is like trying to get blood from a stone. Now is the age of capitalist counter-reforms, attacks, and austerity.

The struggle is crying out for a real alternative – a socialist alternative. Rather than tinker with capitalism, Labour should campaign to get rid of the system altogether. The only way out of austerity is the rational planning of the economy. This can only be done by taking over its commanding heights – the 150 or so key firms together with the banks and insurance companies – and running them under workers’ control and management. This would put an end to the madness of unemployment and burdens of low pay. The extra wealth created by the implementation of such a socialist programme would provide a real future for young people, with free education and a living grant and dramatically reduce the working week, cut the retirement age, increase holidays and increase pay and living conditions.