01 Jun 2011
Socialist Appeal - the Marxist voice of Labour and youth.
The tactless intervention of the EU officials in Greek politics has put the cat among the pigeons here. Until now the pretence was maintained of “political consensus” as a condition for any funding from the IMF and EU loan. There was even talk of a possible "soft restructuring” of subsequent instalments of the € 110 billion loan or a new loan of € 50 - €60 billion. It was hinted that they might lengthen the repayment of the older debt.

The tactless intervention of the EU officials in Greek politics has put the cat among the pigeons here. Until now the pretence was maintained of “political consensus” as a condition for any funding from the IMF and EU loan. There was even talk of a possible "soft restructuring” of subsequent instalments of the € 110 billion loan or a new loan of € 50 - €60 billion. It was hinted that they might lengthen the repayment of the older debt. 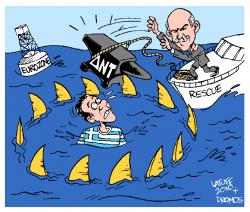 [This article explains the background to the present movement of the youth in Greece.]

But the latest incident has torn away the mask of “democracy” and "national independence" by which the Greek bourgeois attempted to disguise the real situation in which the economic degradation of Greek capitalism has plunged the nation. What does it matter if the existing, bourgeois Constitution speaks of governments elected by the people?

What if the recent poll of “Kappa Research” (posted on April 17 in the newspaper To Vima) shows that the prospect of a coalition between PASOK and the right-wing New Democracy is backed by only 8.7% of the voters?  The lackeys of the big banks, EU officials and the European Central Bank like Mr Rehn and Mr Juncker have decided that such a coalition government corresponds to... national unity! They are demanding that it should be formed sooner rather than later.

Of course, our local capitalist puppets immediately rushed to fall into step with the marching orders given by their superiors. In this way, the PASOK government, the leadership of New Democracy (despite their obvious awkwardness) and the extreme right-wing nationalist party LAOS, with the encouragement of the mass media, have escalated their efforts towards a "consensus". This will be reflected in a round of political meetings next week, aimed at reassuring their bosses in the "markets" that they will do everything to preserve the profits arising from loan agreements entered into by the Greek state.

All these circus clowns and bandits of international and domestic capitalism are becoming more and more brazen and provocative by the day. The reason is that it is becoming clear that all the attempts to keep terminally sick Greek capitalism artificially alive have failed. In order to avert the threat to the euro and to guarantee the payments to the loan sharks, the Greek government has launched a series of vicious attacks on the living standards of Greek working people,

For the first time, Jean-Claude Juncker, the President of the Eurogroup (Council of Finance Ministers of the Eurozone), publicly admitted at yesterday's meeting what the Marxists and serious bourgeois analysts have argued for the last year and a half: the Greek debt cannot be paid. At the end of 2011, according to the latest estimates of the European Commission, it will reach157.7% of GDP, which is “not sustainable."

At the same time, there is a serious recession as a result of the collapse of purchasing power. The fourth quarter of 2010 ended with the biggest decline in GDP (-7.4 %), in the post-war period. This came after a first quarter fall of 4.8%. Finally, the official unemployment rate has already exceeded 15%, with 704,000 registered unemployed in April, 100 000 more than the same month last year.

In these circumstances, in a desperate attempt to avoid a restructuring "debt haircut," i.e. losses for big banks, the IMF, the EU and the PASOK government tried to shift the entire burden of debt onto the backs of the working class. This is very likely to lead, not to the solution of the debt problem, but to complete national bankruptcy.

The government plans to introduce additional cuts this year, amounting to €6 billion, as well as layoffs in the public sector, further reductions in wages and pensions, sweeping privatizations totalling €50 billion by 2015. And they plan to use state property as collateral for a new loan. These actions will inevitably lead to a permanent recession, which will make it impossible to service debt. It will also give the money lenders an absolute stranglehold over the country's wealth.

In this swamp of Greek capitalism, all political developments are very unstable by its very nature, but the general trend is clear. The Papandreou government, although it is carrying out as much "dirty work" as the IMF and EU dictate, is too weak to implement the entire programme required by the lenders. Dozens of PASOK MPs, who are on the receiving end of the dissatisfaction of the working class every day, are indicating that they cannot support the government much longer.

The leaders of the Public Sector Trade Union (ADEDY), seeing the workers’ rights vanishing, and with them their own political/social perks, have sent a message to the Party leadership that they can no longer hold back their members. All these signs indicate that it is only a matter of time before there will be an attempt to replace the Papandreou government with a form of “coalition” government based on “consensus”, with or without an election.

Such a government would inevitably be even tougher on the working class and, under the pressure from a mounting wave of class struggle, would attempt to govern with increasingly Bonapartist methods. Already we saw the murderous police attacks against peaceful protesters during the last general strike. As a result a 31-year-old protester is fighting for his life in an intensive care unit. Many protesters received savage blows and kicks to their heads and legs from the batons of the riot police.

We have seen the start of attacks against thousands of immigrants with the help of neo-Nazis. This shows that the forces of reaction are itching to restore “order”, while the Papandreou government prepares the ground for enforcing “order” with a forthcoming law to limit demonstrations.

Yet, a government of national unity cannot stabilise on the basis of repression and the measures will only serve to radicalise the movement further. The present mobilisations of the youth shows the depth of resentment against the measures that Greek and international capital are attempting to impose. There is a fighting mood amongst the masses, which will not dissipate easily.

Unfortunately, during this critical juncture for the working class, the leadership of the Left [Communist Party and Synaspismos] shows no sign of being determined to fight for a change of government. Instead of explaining to the workers the need to take power and implement a socialist programme, it is gripped by reformist obsessions and finds itself in a state of introversion, passivity and fragmentation.

The leadership of the Communist Party undermines every call for united action against the attacks on the labour movement, limiting themselves to vague appeals for "popular power” some time in an indefinite future. The leadership of SYRIZA (the Left electoral front based on the Synaspismos) is paralysed by internal contradictory "plans", all of which share a common political element: the persistent search for reformist solutions that do not involve a conflict with the foundations of capitalism.

Marxistiki Foni has patiently explained that there is no way out of this crisis on the basis of capitalism. So, whilst on the one hand the ruling class cannot impose its attacks on the working class, on the other hand, the working class lacks the leadership to transform society. Therefore, the crisis will not be resolved in the short-term. In the long-term, however, unless the Left is united to fight to take power and change society from the bottom up, the capitalist crisis will throw the working class into a nightmare of persistent poverty, mass unemployment and reaction.