In the 1950s, amid prosperity and a booming economy, Allen Ginsberg defied conventions and the mainstream by openly standing forward as a homosexual, a socialist and a sharp critic of the capitalist American society he lived in. For this he was persecuted in a famous obscenity trial, which he ended up winning. This is portrayed in the feature film Howl from 2010, now available here on DVD.

In the 1950s, amid prosperity and a booming economy, Allen Ginsberg defied conventions and the mainstream by openly standing forward as a homosexual, a socialist and a sharp critic of the capitalist American society he lived in. For this he was persecuted in a famous obscenity trial, which he ended up winning. This is portrayed in the feature film Howl from 2010.

“I'm with you in Rockland where there are twenty-five thousand mad comrades all together singing the final stanzas of the Internationale” (Allen Ginsberg, “Howl”) 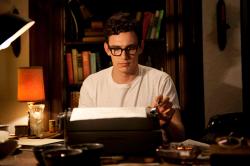 The 1950s saw the beginning of a new period in the development of capitalist society. It was a time when American soldiers, newly returned from World War II, would follow the American Dream as it was sold in advertisements, of moving to the suburbs and starting a family with a house, a car and a steady income. It was the end of the turbulence that had defined the last two decades, and the beginning of seemingly endless prosperity and upward mobility. With increased living standards, broad layers of the working class were now able to achieve decent standards of living, and buy products that had previously been reserved for the upper classes – hence the phenomenon of so-called “consumerism” – the idea that working class families could buy happiness with their disposable incomes. It was the beginning of the dominance of American cultural, economic and political imperialism, and in a sense the rebirth of capitalism after the crisis of the 1930s and the destruction of World War II. However, it was also the time when a young poet named Allen Ginsberg published a poem called “Howl”, which criticized all these phenomena, and at the same time foreshadowed the student and left movements of decades to come. The film Howl that came out in 2010 (and the UK in the spring of this year) tells the story of Ginsberg and his poem, and the trial that sought to censor and silence his social critique.

Living as a homosexual and a socialist and documenting this in his style-breaking poetry in the period of McCarthyism, Ginsberg was not afraid of being different. The feature film Howl, written and directed by Rob Epstein and Jeffrey Friedman, portrays Ginsberg through a combination of an interview with the poet, a reading of his most famous poem “Howl”, and the trial against Ginsberg, in which the prosecutor attempted to get the publisher of the poem, Lawrence Ferlinghetti, censored for obscenity. It is a captivating, yet not unproblematic, portrayal of Ginsberg and his poetry.

The film starts with a reading by a young Allen Ginsberg (played by James Franco) of the poem “Howl”, filmed in black-and-white, in a smoke-filled room full of artists, hipsters and students, in the heat of the Beat-wave of the 1950s. Ginsberg starts reading the poem from the beginning, with the famous opening:

“I saw the best minds of my generation destroyed by madness, starving hysterical naked,
dragging themselves through the negro streets at dawn looking for an angry fix,
angelheaded hipsters burning for the ancient heavenly connection to the starry dynamo in the machinery of night,
who poverty and tatters and hollow-eyed and high sat up smoking in the supernatural darkness of cold-water flats floating across the tops of cities contemplating jazz”.

When the word “jazz” is mentioned, the scene is cut off, and a vibrant jazz tune starts playing, while pictures in black-and-white and color slide across the screen, along with the opening credits. This is a great opening, which sets the mood of the film and illustrates the time the story is situated in. However, it also foreshadows one of the problems with the movie, namely the rather light portrayal of the story, which misses the essence of “Howl”, a poem that is much darker and more pessimistic about the society it depicts when you read into it than when you see the movie. But more on this later.

The film proceeds by cutting back and forth in between three storylines: Ginsberg’s reading of the poem, which periodically drifts into an animation of what he reads, an interview in which he talks about his ideas on art and his life, which is supplemented with flashbacks, and the obscenity trial against the poem, where literary experts are questioned by the prosecutor and the defendant to determine whether the poem has literary value, and whether there is a need for the obscenity the poem contains. One of these examples of alleged obscenity is read out by the prosecutor:

“who howled on their knees in the subway and were dragged off the roof waving genitals and manuscripts,
who let themselves be fucked in the ass by saintly motorcyclists, and screamed with joy,
who blew and were blown by those human seraphim, the sailors, caresses of Atlantic and Caribbean love,
who balled in the morning in the evenings in rose-gardens and the grass of public parks and cemeteries scattering their semen freely to whomever come who may”.

This passage starts off a debate over whether there are sexual overtones in the phrase “who blew and were blown by those human seraphim, the sailors”, and whether these kinds of sexual references are necessary to convey the meaning of the poem. As a side note, the debate over Ginsberg’s “obscenity” in his poem which is widely celebrated today seems very similar to the debate over Hip Hop’s “obscenity” and whether this should be censored. This is not the place to go into an analysis of “explicit content” in rap music and attempts to censor it, but suffice it to say that despite the differences between this and the Ginsberg trial, both attempts at censorship represent the fear of bourgeois and petty-bourgeois moralists that the social and political realities that these art forms describe should be put into words for the masses to hear.

During the course of the court scenes, the various literary experts who are questioned in the case help shed light on the meaning of the poem, just like the interview with Ginsberg, and in a more artistic fashion, the animation of the poem. This gives an introduction to Ginsberg and his poetry that is much more alive than any lecture, and hopefully the film will give young people of today a better understanding of Ginsberg and his relevance to today’s society, which is still permeated with bourgeois moralism, so-called “consumerism”, “materialism” and all the other symptoms of capitalist decay and cultural poverty that Ginsberg portrayed so masterfully.

Howl is a very ambitious project. It is a feature film about a poet whose fiction was very deeply rooted in the reality of his time. If nothing else, it deserves credit for undertaking the task of portraying something as complicated as Ginsberg and his poetry. It also combines animation and poetry with a documentary-like realistic portrayal of events. In doing so, it elevates itself above the countless films made on assembly lines from ready-made formulas in Hollywood, and gives the audience an experience that both educates and conveys Ginsberg’s poetry to today’s audience in a vivid fashion.

However, when it comes to giving a complete portrayal of Ginsberg, “Howl” and the ensuing trial, the film does not measure up to the task. It focuses mainly on Ginsberg’s views on art, his life as a homosexual, the censorship trial, and the so-called Beat Generation (as a side note, when asked what the Beat Generation was in the film, Ginsberg replies that there was no Beat Generation – just a bunch of guys that wanted to get published…). These are all very important elements in explaining the poem “Howl” and its author. However, one very central piece in the puzzle is missing: Ginsberg’s political beliefs, which are very much present in his poetry.

Virtually all the references to socialism in “Howl” are neglected in the animation of the poem. One of these is in part III of the poem, addressed to Carl Solomon, a friend of Ginsberg’s whom he spent time with in the same mental institution. He says:

One must remember that this is written in the wake of McCarthyism, when a whole series of America’s finest artists, many of whom were by no means communists, were blacklisted and persecuted. Therefore, these lines were immensely controversial at the time they were written. And despite the slightly ironic tone of the lines, Ginsberg was very sympathetic to the ideals of socialism.

Ginsberg’s mother had been an active member of the Communist Party, which undoubtedly influenced his views on communism. However, although sympathetic to socialism, he was also deeply critical of the Stalinist dictatorships of his time. It seems that the political ideology that Ginsberg was closest to is that of Leon Trotsky, one of the most prominent leaders of the Russian Revolution, who was sent into exile and killed by Joseph Stalin, whose bureaucratic methods Trotsky had spent the last part of his life combating. In “A Footnote to Howl”, which is read at the end of the film, Ginsberg writes:

“Holy time in eternity holy eternity in time holy the clocks in space holy the fourth dimension holy the fifth International holy the Angel in Moloch!”

From this note it is clear that Ginsberg was if not in complete agreement, then at least very sympathetic to the ideas of Trotskyism. Trotsky was killed shortly after the founding of the Fourth International; therefore it would seem logical for someone like Ginsberg who sympathized with his ideas to expect the setting up of a Fifth International. However, with the economic boom of the post-war era, and the consequent ebb in revolutionary sentiment – especially in the industrialized countries – and the inability of the leaders of the Fourth International to adapt to the new situation, their organization remained a relatively small group, which degenerated and disintegrated into various sects, and no mass-based Fifth International has been set up to this day. Nonetheless, it is clear from the above quotations that Ginsberg had a firm belief in socialist ideals, something that is almost completely disregarded in the movie.

Another shortcoming of the film is its value as a work of art. Its animations of Ginsberg’s poem do not seem to convey the dark, pessimistic mood of “Howl” – for that it is much too colorful. Also, in the reading of the poem, James Franco does not seem to grasp the deep social criticisms of “Howl”, and therefore his voice does not convey the same concern as does Ginsberg’s when you listen to recordings of his readings. However, it should be said that portraying such a debated character as Allen Ginsberg is an extremely difficult task, and Franco does a great job of capturing Ginsberg’s distinct voice, especially in the interview scenes.

Howl sets out to fulfill a very difficult task that most would probably fail to accomplish. It does have shortcomings both in the portrayal of Ginsberg and his poetry, on a documentary as well as an artistic level, but it is definitely a movie that is worth seeing, especially if one takes it as an introduction to Ginsberg’s writings. With the world revolution resonating from the Middle East to Wisconsin, it is my hope that artists, workers and youth will critically examine Howl and Ginsberg’s poetry and politics, and be inspired to stand up to an unjust society and join the struggle for socialism.

Howl is now available in the UK on DVD.