In the society in which we currently find ourselves, class society, a small minority of the population holds ownership and control over industry, banks and all major means for producing wealth. Because we, the workers, do not get to enjoy this wealth, although we create it, our lives are reduced to working for wages that disappear when we pay the bills. How does the ruling class keep us putting up with such a lifestyle? One way is the fact that the ruling class’s ideology permeates contemporary culture and dominates the media.

In the society in which we currently find ourselves, class society, a small minority of the population holds ownership and control over industry, banks and all major means for producing wealth. Because we, the workers, do not get to enjoy this wealth, although we create it, our lives are reduced to working for wages that disappear when we pay the bills. How does the ruling class keep us putting up with such a lifestyle? One way is the fact that the ruling class’s ideology permeates contemporary culture and dominates the media.

On the surface, media sources constantly accuse each other of having a “left wing” or “right wing” bias, but the bickering just obscures the inner workings of a media system owned and operated in the interests of the corporate shareholders and advertisers, not the interests of working people. In 1997, the CEO of CBS/Westinghouse said, “We are here to serve our advertisers. That is our raison d‘être (reason for existing).”

A small and decreasing number of multi-billionaire media conglomerates with vast holdings in several areas of industry own virtually the entire media system. Two decades ago it was “The Big Ten” businesses that dominated all areas of media. Now it’s “The Big Six.” They own all the largest film studios, television programs, cable systems, book publishing, magazines, newspapers, record labels, Internet websites, retail, telephone systems, even sports teams and theme parks! The six biggest media companies worldwide are AOL/Time Warner, Walt Disney Co, Bertelsmann AG, Viacom, News Corporation, and Vivendi Universal. In the US, the top five are Disney, Viacom, Time Warner, News Corp and General Electric, which together own a whopping 90% of the media market. 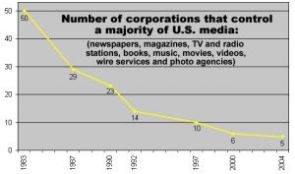 Over the years, fewer companies have come to dominate the market, partly because the most powerful companies cooperate to eliminate their competition. This concentration of capital is one of the central tendencies of a capitalist economy. This means the media system is effectively owned and controlled by only the wealthiest handful of companies in the business.

The consequence of such a system is that it provides news, analysis and debate, only so far as it does not pose a threat to the ruling class or expose the full extent its activities. Journalists, editors, and staff of corporate media are surrounded by and inevitably internalize corporate values. Media sources may appear to debate hot issues, but if they can help it, they rarely touch on topics that fundamentally affect their shareholders and advertisers.

As University of Illinois professor Robert McChesney said in the article “The New Global Media; It’s a Small World of Big Conglomerates,” published in The Nation magazine: “…the media giants are significant beneficiaries of the current social structure around the world, and any upheaval in property or social relations -- particularly to the extent that it reduces the power of business -- is not in their interest.”

The past decades have been filled with imperialist interventions of different sorts, almost invariably to protect corporate interests and capital flow. But the media rarely questions the government’s right to invade any country at any moment for any reason. Administration officials and foreign policy spokespeople often talk about “spreading democracy.” What imperialism is really spreading is the reach of capital and access to resources and new markets. Although this should be of great concern to the working class majority, corporate media never questions the equation of free markets with “democracy.”

A report entitled “Project Censored” explains the phenomenon of self-censorship in capitalist media: “It is illustrative that the Today Show on NBC -- a network owned by General Electric -- removed mention of defective GE-made bolts from a correspondent’s news report in November 1989. And it’s telling that the program’s producers told a guest expert on consumer boycotts not to mention a major boycott targeting GE. But it’s unlikely that anyone from GE’s front office specifically ordered Today Show producers to protect the company’s image. No one had to. That’s how self-censorship works.” 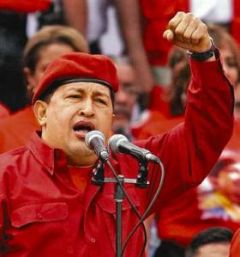 Hugo ChávezIn times of great revolutionary activity, when class struggle contradictions burst onto the political arena, the media has a big role to play. Take for example the ongoing Bolivarian Revolution in Venezuela. Privately owned media in Venezuela has become the face of the counter-revolution’s campaign of misinformation in the country and abroad. Corporate media in the US has functioned similarly, calling President Hugo Chavez a tyrant and giving no coverage to the achievements of the Venezuelan working class. Ruling class media can recognize that working class victories abroad are contrary to the interests of their class here at home. Likewise, working people can see that a working class triumph in any part of the world is in their interest as a class.

Amid the ruling class-dominated media system, the socialist point of view is slowly gaining territory. After all, working people living through the humdrum motions of wage labor can feel the misery of a system based on exploitation. A new generation of workers and youth are growing increasingly class conscious and working class tools like the Socialist Appeal are a precious instrument for the growing movement.

The capitalist world we live in today contains the seeds of a socialist tomorrow. The working class has all the tools it needs to run society – but it doesn’t control them. Through the socialist revolution and the democratization of the media under the control and management of working people, we will at last experience true freedom of expression and the press.